What is the treatment for bleeding gums?

What is the treatment for bleeding gums? 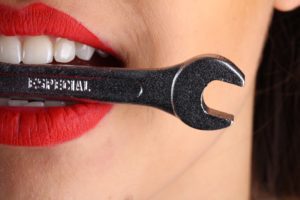 Unless you just got punched in the mouth, bleeding gums are usually a sign of gum disease. So, in most cases, the treatment for bleeding gums, means treating what is probably early stage gum disease, or gingivitis.  These few steps will make any mouth healthier, but more importantly, they will vastly improve you bleeding gums within two weeks. If you don’t see improvement in that time, you may have a different health issue and it’s time to see a doctor.  Either way, with these five steps, you will know.

Brush and floss (no shortcuts)

We know you get tired of hearing this, but you cannot clear up gingivitis without practicing good oral hygiene. That means breaking out the dental floss every day and cleaning between your teeth, and then brushing—twice a day for two minutes. No shortcuts.  Food and drinks leave teeth coated in a substance, bacteria love to eat. If you don’t get that off, the bacteria party on and produce plaque. Plaque causes infection, swollen gums and holes in your enamel. Flossing and brushing shuts that bacteria party down.

A word of caution here. If you have never flossed before or it has been awhile, you will probably notice that this new awesome oral hygiene habit makes your gums bleed even more. Don’t let this put you off. The more you floss, the more your gums will get used to it and the less they will bleed. Any bleeding should stop after a few days of flossing.

You have probably used it for scrapes and cuts, but hydrogen peroxide is also a great mouth wash. It helps kill bacteria by releasing oxygen. Those are the little bubbles you see when you pour hydrogen peroxide.  That oxygen release helps get rid of even the most aggressive forms of gum disease.

If your gums are bleeding, eat more fruit and vegetables.  Actually, eating more fruits and vegetables is good idea anyway, but particularly if you have gum disease. A deficiency in vitamin C and K can exacerbate bleeding gums. Your immune system needs vitamin C to stay strong and resistant to the bacteria that want to infect your gums and vitamin K is important for blood clotting. Oranges, sweet potatoes, red peppers and carrots are all good sources of vitamin C.  For vitamin K, think leafy greens: spinach, kale, collard and mustard greens.

While you’re eating all those fruits and veggies, eat less carbs! Food loaded with carbs and sugar encourage bacteria growth and plaque.

Ditch the soda for green tea

If you smoke— really try to stop. We know that is so easier said than done, but smoking It is heavily linked to gum disease. That’s in addition to all the other bad things such as lung disease, heart disease, high blood pressure and strokes.  Smoking undermines your immune system making it more difficult for your body to fight off infections, leaving your mouth vulnerable to gum disease.

Rinsing with salt water is also a good treatment for bleeding gums.  Salt water cleans any wounds in your mouth and removes bacteria. Add a half a teaspoon of salt to a glass of warm water and swish it around in your mouth for just a few seconds. Do this three to four times a day.

Say good-bye to bleeding gums or…

Taking these steps should significantly reduce  bleeding gums within 10 days. If this does not happen, you need to see your dentist. The problem may be severe enough that your gums won’t heal without a deep dental cleaning to remove plaque and tartar. Your dentist may also suggest you see your internist to rule out other health issuess that may be attributing to the problem. Call us at (602) 840-5400 or visit our website at Artistic Dental to schedule an appointment with one of our dentists or learn more about our how we can help.